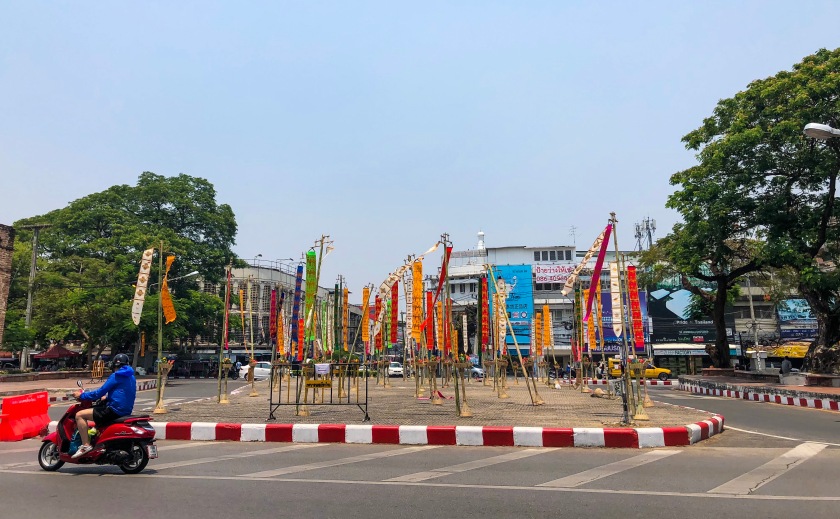 I flew from Krabi directly into Chiang Mai, and upon arrival, saw the same amount of western backpackers. But this time, it was calm, quite, and they knew how to blend in to a certain degree. It was refreshing, and the Thailand I had wished for.

I was only in Chiang Mai for a few days before the Thai New Year begun, also known as Songkran. And if you know anything about this holiday, you know that I was about to get very wet. What I didn’t know is that the locals decide that three days for the holiday isn’t enough. Songkran was to begin on April 13th, but as I was walking to lunch on the 12th, I realized that the children like to begin the country-wide water fight a day early. So much so, that not even five minutes into my walk, I was already soaked, had to buy a dry bag for my stuff, and joined in on the fun.

Before I had the chance to fill my water gun however, I had heard that khao soi was an absolute must-have in Thailand. And better yet, I heard a rumor that the very best khao soi was in Chiang Mai, so I knew I had to try it. Problem was, the place that I heard about was supposed to be pretty local and pretty difficult to find. After walking around the Old City, I finally came across the spot I had been looking for: a small white tent right next to the temple with a few tables and the menu only in Thai. I managed to order the khao soi and a lotus root juice in broken Thai, sat at a table next to some locals, and enjoyed one of the best (and cheapest) meals of my life.

So if you’re ever in Chiang Mai and want the best khao soi, head to Khao Soi Khun Yai on the north side of Old City. Look for the white tent behind the temple walls. And get ready for some of the best food in Thailand.

Ok so back to the Thai New Year. This might be the absolute greatest time of the year in Thailand. What began with a cleansing of the Buddha statues throughout the country to begin anew turned into a country-wide water fight. If you’re lucky enough to be in Chiang Mai (or anywhere in Thailand) in mid-April for Songkran, here’s what you need to know:

Be prepared and buy water guns early. You can get them at Big C Supermarket or on the side of the road around the time of Songkran. If you do get them along the road, you can most likely bargain and get the price down a bit. But it’s important you buy them before Songkran begins because prices will absolutely skyrocket. Get one with a big water chamber because, while you can find places to fill up, some places will charge you or you will be filling up with the dirty moat water (which is a whole other topic).

Chiang Mai is known to be the best place for Songkran in Thailand, and most of that is because of Old City. The Old City of Chiang Mai is surrounded by a wall and moat with gates at each end. And every side of Old City is definitely a different type of party.

East end is where almost all of the tourists/Westerners go to party. This is where you’ll find the pool parties, the bars, and the crowds. It’s a great time to spend a day and you’ll meet a ton of people. But remember, it will be filled with people just like you, so while you’ll definitely have some fun, this isn’t where you want to be if you’re looking for the local-version of  New Years.

North end of Old City is a good mix of both local and tourists. The most traffic is along here so the streets are packed with cars and crowds walking amongst them. There are a ton of street food vendors and some good music. Most of the Thai young adults hang here, so if you want a good local party without completely standing out, this is the place to be.

South end is the quietest side of Old City during Songkran. This is mostly the side of the city that the cars can pass on without having to get stuck in traffic. While it is quiet, you’ll definitely still get wet walking along the streets here so don’t think you’re escaping the fun.

My FAVORITE side of Old City was the West End. After partying on every other side of Old City, I had met a local friend at the hostel I was staying at that recommended I go to the west side. She let me know that I would be the only foreigner but promised it would be the most fun. And she was 100% right. Not only was I the ONLY foreigner but the locals welcomed me with open arms (and water guns filled with ice water). If you really want to experience the real Songkran, do NOT miss heading to the west end.

So yes, while the Thai islands didn’t win me over, the happiness I experienced during Songkran in Chiang Mai is something I will never forget. However, all good times come to an end, and it was time for me to head to Bangkok.